An adventurer from a shaman group in the Blazing Desert (Asgar: world 3). Clemyth is well known for her inventions of new things and tools. She is married and has a son. Sadly, her husband contracted an incurable disease. Heartbroken & desperate to keep her husband alive, she hears a rumor about a cure to the disease that's located in the unknown land. She travels to a place called Land of Nowhere with her son in hope of obtaining something to cure her husband. she made it to the Land of Nowhere, her son went missing and she barely managed to find her way back. She became a legend amongst explorers. Unfortunately when she gets back she finds out her husband has already passed away.

After being persuaded over a long time by her friends, she finally agreed to lead the Ancient Chisel, a group of explorers and artisans. While traveling with her friend’s daughter Aris. She realizes her friend's daughter, Aris, is a member of Pentagon. Because Aris reminds her of her lost son, her longing for her son grew stronger.. She joins the Pentagon, but later goes back to the non existent land to find her son.ecame the last member of Pentagon on the condition that they wouldn’t interfere with her decisions. After completing the Staff of Providence, she once again started her search for the Land of Nowhere. 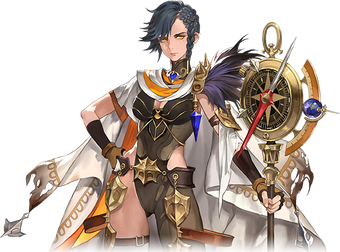